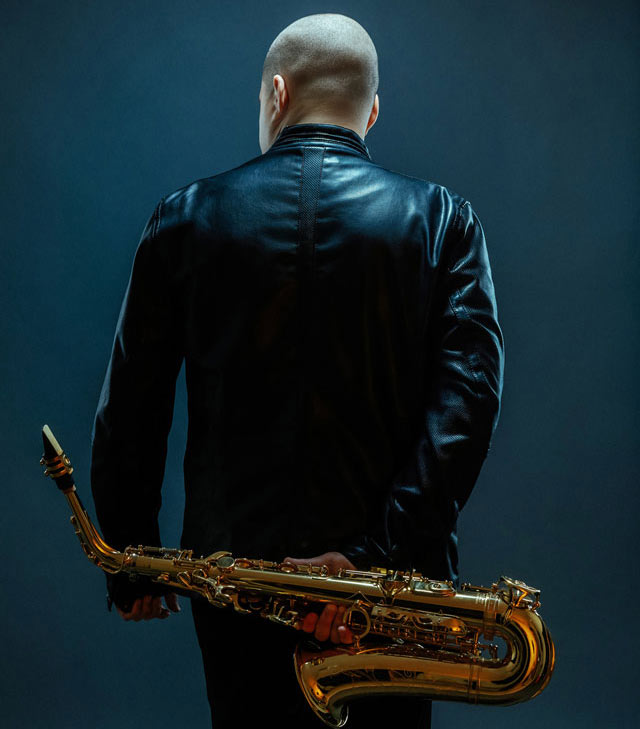 GRAMMY Nominated Saxophonist & Composer, Alex Han, has been recognized as one of the most promising musicians of his generation. He identifies as more than just a jazz musician – While giving a nod to the jazz tradition, his music is deeply inspired by many genres with the goal of bringing contemporary instrumental music to broader audiences. His refreshing style & passion are what he uses to bring his vision of where music can go into reality.

Han began his musical journey at the age of 8, when his parents encouraged him to take up the alto saxophone. Soon thereafter, his innate musical ability began to emerge and by age 12, he was one of two national recipients of the VSA Arts, Young Soloists Award. Around the same time, he was invited by GRAMMY Award Winning Saxophonist, Paquito D’Rivera, to sit-in with him at a Jazz at Lincoln Center performance. A year later, young Han was asked to perform at the 2001 Festival Internacional de Jazz de Lapataia in Uruguay. There, he cut his teeth alongside many Jazz Masters including Joe Lovano, Kenny Baron and Antonio Sanchez. Later in 2001, Han at age 13 was invited to lead a performance of his own at the North Sea Jazz Festival.

Han would continue to perform as a leader at various jazz festivals throughout his teens. In 2005, Han at age 17 won the 17th Annual Yamaha Young Performing Artists Competition for Saxophone. He was also selected for the alto chairs in the 2005 Monterey Jazz Festival Next Generation Orchestra and the 2006 Gibson/Baldwin GRAMMY Jazz Ensemble. A few months later, he won a 2006 ASCAP Foundation Young Jazz Composer Award.

At 18, Han signed with Rico Reeds as their youngest artist endorsee. Shortly after, he was awarded the Berklee College of Music Presidential Scholarship, which covered full tuition, room & board for 4 years.

In 2009, after 3 years, Han completed his studies at Berklee College of Music after which he was signed as a Yamaha Artist. By age 21, Alex was fortunate to have acquired many product endorsements with major brands in the industry.

Alex continued to tour internationally with Marcus Miller and work with other renowned musicians such as Richard Bona, Stanley Clarke & Terri Lyne Carrington while occasionally leading projects of his own. In 2016, Miller’s album “Afrodeezia” was nominated for a GRAMMY on which Han was extensively featured.

Today, Han still works with Marcus Miller and in June 2017 released his debut album entitled “Spirit”, produced by Miller. A true labor of determination, “Spirit” stands out as a remarkable exhibition of Han’s abilities not only as a performer but additionally as a composer, having written 7 out of the 10 compositions on the album. Han also includes 2 well crafted covers of Sting’s “Fragile” & Yohannes Tona’s “The Jungle Way Out” that bring a newness to the tunes while title track “Spirit”, Miller’s personalized composition for Han, elevates the energy of the album to its maximum.

With astounding performances & exceptional attention to serving the music, “Spirit” is set to be a consequential album in the world of Jazz & Instrumental Music and has received a GRAMMY Nomination for the 2017 Year.